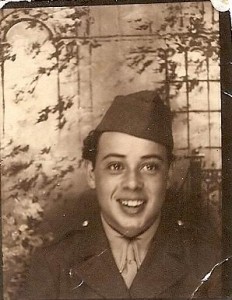 My dad, Frank, is nearly 91 years old. He says each day is a gift now. It’s amazing he’s still alive, having faced death many times throughout his life. He served in World War II from the age of 18-20, he was injured in Normandy, France, and nearly died several times during the war. The most dramatic moment was when a German soldier pointed his gun to dad’s head and was about to pull the trigger when my dad fell to his knees and began reciting the Lord’s prayer. The German soldier could not pull the trigger. Instead he marched my dad to a German prison camp, where he spent the last 6 weeks of the war. Now in his later years he has received some honors from his home town, including being the Grand Marshal at the 4th of July parade 3 years ago, and as Grand Marshal of the Veteran’s Day Parade last year. He always wears his cap that says “WWII Veteran”, proudly displays his Army medals on the war in his den. That wasn’t always the case. For all of my growing up years, dad never spoke of the war. In fact it wasn’t until 50 years after the war that he shared his story, which we now have written down and put into a booklet. Because his story is part of, not only his Legacy, but also world history, his war memorabilia is important to our family lineage and dynasty!

Some of what dad has besides his medals and uniform are articles and books, photos, videos of him telling his story (including one that aired on the local public television station), as well as his written Legacy .

Now, some 70 years after the war, it seems there is a new fascination with the events surrounding WWII. The local book store has at least 5 quarterly magazines on its shelves on the subject, there have been movies, TV shows and books on different aspects of WWII in recent years.

Dad’s war stories are of interest to many family members, friends and other veterans of foreign wars. The quest to preserve the stories and memorabilia becomes more and more important as time passes.

Luckily, there is a way to let Dad’s legacy live on in a fun and secure environment. Secured Inheritance is the first 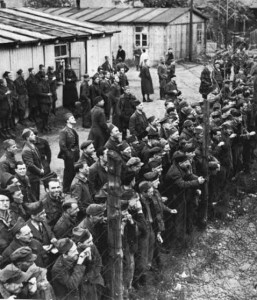 online Legacy builder that allows anyone to preserve a dynasty! As a daughter, I have the ability to record all the photos and stories of my father’s war stories in my Legacy Vault. After it is stored and recorded, I can allow access to all family and friends if I wish. I’m excited for my kids and Grandchildren to have the honor of knowing everything my Father ultimately did for his country, and how it will be passed on from generation to generation. Thank you, Secured Inheritance, for helping me to preserve my family’s legacy!

Find out how Secured Inheritance can help you preserve your Legacy! Celebrate today!